As you may know, Peacehaven Town Council have signed a climate emergency statement, and are putting policies in place to cut our carbon emissions.

It's also worth remembering that we, as individuals can work towards this too.

Like many people now, I try to avoid plastic when I can, and I've picked up a few ideas about how to do that, which I'm sharing here.

I know that some supermarkets are starting to replace the thin plastic bags for loose produce with paper alternatives, but if your supermarket still has the plastic ones, here's an alternative. I happened to have an unused net curtain at home as I'd bought a pair and only needed one, but you could probably find one in a charity shop. A simple bag of any size is easy to make. I did make a fold-over bit at the top for a string-pull, but I'm sure you could do without that if you're careful when you put them in your trolley. The weight is not significant enough to add much to the cost, and the cashier can easily see what's inside. 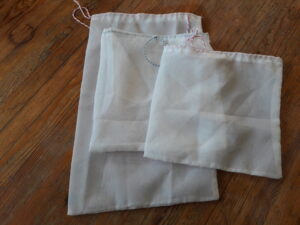 I stopped buying paper towels about 2 years ago. I now use small squares cut from old T-shirts which I keep in a bowl on the kitchen counter. Yes, I know that paper towels are paper obviously, but they do come wrapped in plastic and they're quite bulky items for shipping. I chose T shirts as I buy second hand slogan T shirts for crafting projects and so end up with lots of left over pieces which I might have otherwise had to throw away. Other fabrics, such as old towels could work well, too. 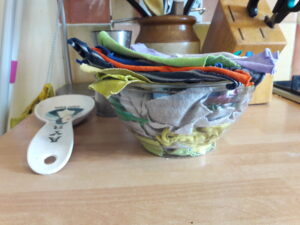 However hard we try, we all end up with some plastic, and because I shop on line a fair bit, I often get those heavy duty plastic envelopes which I've been keeping rather than throwing away.
I'm in some recycling craft groups on Facebook and came across the idea of “plarn” - plastic yarn - a while back and so thought I'd give it ago.

This is my first effort and I thought I'd share the method with you in case any knitters out there would like to give it a go. This took about 6 large plastic envelopes.

Cut the plastic bag/envelope into strips about an inch wide.

Cut a small slit at the end of each strip, thread the next strip though and pull (not too tightly or it might tear.) Roll into a ball.

Knit 5 squares - For this box I cast on 14 stitches and knitted 18 rows of garter stitch. It's best to use quite large gauge needles; these are 10 mm.

Sew the squares together to form a box. I used embroidery thread for this as I already had it in my supplies. 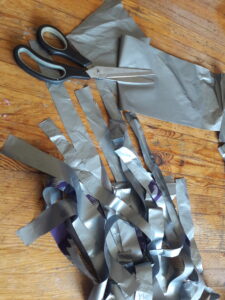 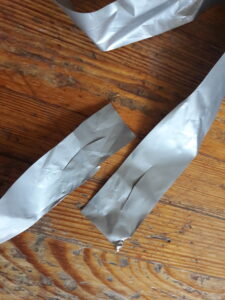 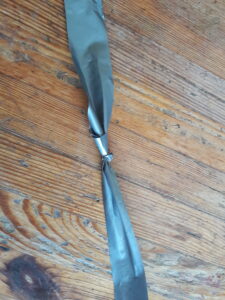 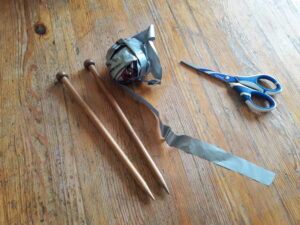 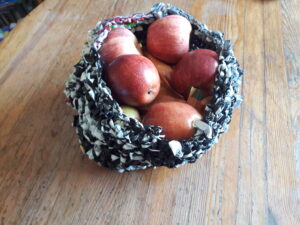 If you can crochet (which I can't) then there are many more things you can create; Pinterest is a great source of ideas.