PRESENTATIONS at THE ANNUAL TOWN MEETING

Thank you to all Peacehaven residents and visitors who attended the Annual Town Meeting on Tuesday 19th March. The minutes are in the process of being typed and will be on the PTC website by Monday 25th March.

Our thanks to the local organisations who also attended to receive their grant cheques.

On behalf of The Rotary Club, Newhaven, Peacehaven & Telscombe Branch, Jax Whitely received a cheque for £250 from our Deputy Mayor, Cllr. Job Harris

On behalf of Wave Leisure Trust - Daisy Bennett received a cheque for £750, for their contribution and support at the 2018 Community Summer Fair and for organising summer activities in Peacehaven.

On behalf The Saltdean Community Association, Cathy Gallagher accepted a cheque for £200 towards a much needed projector.

Other grants included a £1000 award to the INNA charity to cover their room hire. INNA work with local residents in offering an advice service.

A grant for £300 was awarded to the Peacehaven & Telscombe Cliffs Scouts.

In the absence of the Mayor of Peacehaven, Deputy Mayor, Cllr. Job Harris announced that Cllr. Jackie Harrison-Hicks had raised £6,626.78 during her term of office.
This sum would be equally split giving Anchor Health Centre and Rowe Avenue Surgery £ 3,313,39 each. Early into Cllr. Harrison-Hicks year the surgeries both decided that they would like a portable ECG machine, so this is what the Mayor had been fundraising for.

Unfortunately, The Mayor was unable to attend due to a recent admission to hospital. We all wish her a speedy recovery. 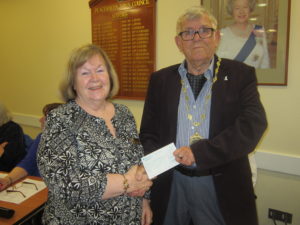 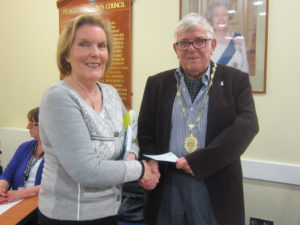